A boy offender restrained and punished over a birching horse.

Birching is a type of corporal punishment where the delinquent is beaten with a bundle of birch twigs, called a birch or a birch rod.

From Antiquity throughout the Middle Ages up to well into the 19th century, birching was very popular for both the punishment of criminal offenders (either given on the back or on the bare buttocks) and for the punishment of children at home and in school. Birching was extensively used in the great public schools, most notably Eton.

For a severe birching, often two birch rods would be made. The delinquent would be birched with the first rod until too many twigs had broken off and it was no longer deemed fit for use. This might be the case after, say, 24 strokes. Then the second, fresh, birch was taken and the birching was continued until the second birch was also "used up".

Birching was so popular for corporal punishment because it is very painful, but at the same time comparatively safe because the individual birch twigs are lightweight and air resistance ensures that you can't strike the skin too hard. Even heavy birching will cause only surface skin injuries (possibly drawing blood), but will do no deeper damage to the tissue or internal organs. Thus, a birching is generally safer than a flogging with a whip or cane.

In the UK, birching as a judicial corporal punishment for young offenders was abolished in 1947. The Isle of Man (a small island between Britain and Ireland with its own legal system as a crown dependency outside the UK) caused a good deal of controversy by continuing to birch young offenders into the 1970s. There were generally two main types of birch:

Used in schools, the British navy, and judicially in prisons and by police officers after summary judgement by magistrates. It consisted of a "spray" of (usually) birch twigs tied to form a fairly loose bundle with a handle at one end

The "Isle of Man" type (hazel or willow)

This was used, as the name implies, on the Isle of Man to birch young male offenders and consisted of four to six hazel or willow rods bound together. This was generally thought to be more painful than the spray birch because, in effect, several cane-like rods were being applied to the bare buttocks with each stroke.

For judicial use, the dimensions (overall length, length of handle, diameter of spray and weight, etc.) were all specified for various ages of miscreants. The smallest birch being for boys age 10 and under, a larger, heavier one for boys aged 11 to 15, and the largest and heaviest birch for boys aged 16+, and adult men. In practice, the dimensions could vary enormously, as could the severity with which the strokes were applied. Judicial birchings of both boys and adult men were always applied to the bare buttocks.

In the Czech Republic and Slovakia, boys traditionally awake young, nubile girls on the morning after Easter by dowsing them with water and whipping them on their buttocks or legs with a pomlázka, a specially-designed and decorated birch switch made from eight braided willow branches. The dowsing and whipping is thought to chase away illness and bad spirits, and to bring good luck, wealth and rich harvest for the whole year. See Easter and spanking.

In Britain, Germany, Austria and Switzerland, the birch is found in folkloristic traditions around Christmas. See Christmas and spanking.

Institutions that meted out a lot of birchings, such as schools, reformatories and prisons, often had specially designed items of furniture called birching table, birching block, birching horse, or birching pony. The delinquent was laid (and often restrained) over these to keep him or her in a good position for the duration of the punishment (see lying position, half-standing position and bent-over-object position). When furniture was not used, it was common for the miscreant to be "horsed" on the back of another person to administer a birching.

The Russian mainstream film Of Freaks and Men (1998), depicts the filming of the earliest corporal punishment stag films, including two F/F birching scenes, in the 1900s. 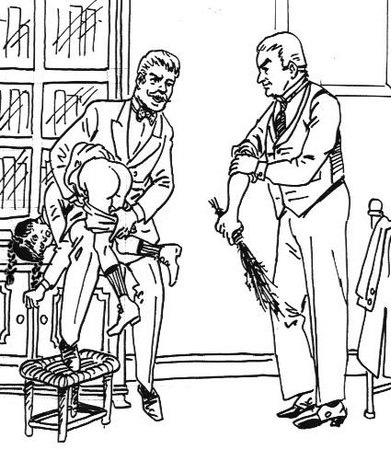