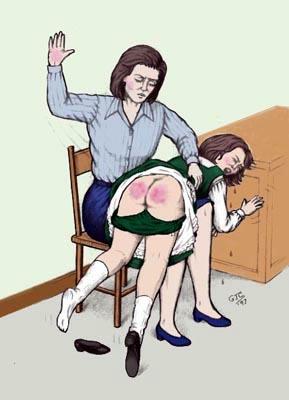 Nearly all of his drawings depict english schoolgirls. His work features a wide range of M/f and F/f spanking scenes. He never drew any frontal nudity or anything obscene.

Very little is known about the artist. He signed his drawings with "GJC", standing for George Jackson Churchward, but this was a pseudonym. The initials of his real name were "M. P.". The artist is said to have grown up in England but lived somewhere in the Caribbean as an adult. His full name and more details about his life are known to some fans in the spanking art community, but are generally not shared publicly in the interest of the artist's family.

His known spanking art works date from 1996 to 2000. In those five years he was amazingly productive while maintaining a high standard of detail and realism in his drawings.

A lot of his artwork image files are named with the prefix ESG, giving rise to some speculation among his fans. One possible explanation is that ESG stands for "english schoolgirl".

George Jackson Churchward was in his early 50's when he died of cancer.