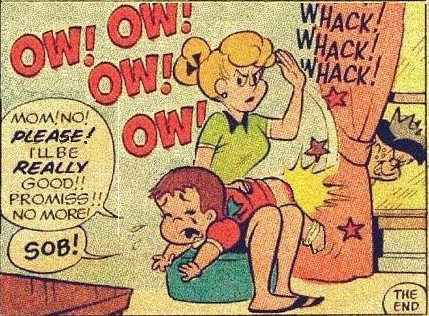 The adjective good encompasses many positive things, from a simple "not bad" to anywhere in the range between "likeable" and "excellent". It can be applied to things, people, animals, and actions.

Externally hosted image on Handprints: Drawings Gallery #135
A post-spanking promise to be good, by Aprion.

"Be good!" is a common admonition, typically from a parent to a child. It is a general instruction to be "good" in all ways and avoid any kind of misbehaviour. A related phrase is "play nice!"

"I'll be good" is a common phrase said (or cried) by a spankee before, during, or after their spanking. It is a promise for the future, but also often used as a kind of apology about the past, a statement of remorse. Indirectly, it is also an admission of guilt because a promise to be "good" implies an acknowledgement they had been "bad". When "I'll be good!" is promised before a spanking, the delinquent may hope to avoid, or lessen, their looming punishment. When said during a spanking, the spankee may hope it will help that the punishment is deemed sufficient and come to an end. In both cases, if the words remain without effect, they reveal the spanker's determination and the spankee's helplessness, a common trope in spanking fiction and roleplay.

"I'll be good" is sometimes used by an adult to another before entering a socially difficult situation when they want to reassure them "don't worry, I'm self-controlled and will make sure nothing escalates".

When used in combination with methods of punishment, "good" means "thorough", "effective". So the promise of a "good spanking" adds the information that it will not be a short or light spanking. Similarly, an authority figure can announce a "good scrubbing", a "good mouth-soaping", etc.