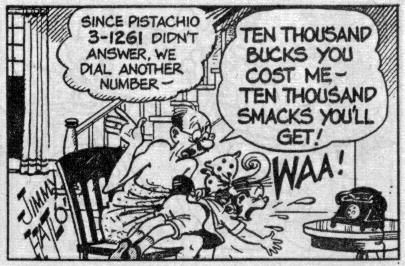 Little Iodine is a fictional comic strip character created by American cartoonist Jimmy Hatlo for the King Features Synicate. While the date of her first appearance is under dispute, she is known to have made various unnamed appearances as a background character in Hatlo's early 'gag' series, They'll Do it Everytime, starting around 1931. Along with Ernie Bushmiller's Nancy and Marjory Henderson Buell's Little Lulu, Iodine initiated a trend in mischievous little girl characters that appeared during the Depression era. She would, indeed, serve as a template for many later characters, including Archie Comics' Li'l Jinx and St. John Publications' Little Eva.

Little Iodine’s origins go back to Jimmy Hatlo’s They’ll Do it Every Time (San Francisco Call-Bulletin, 1929), a single panel cartoon devoted to the absurdities of modern life. While the strip had no real continuing characters for the first few years, two central figures began to emerge during the early thirties; perpetual loser Henry Tremblechin and his high-spirited daughter (unnamed at first, but later referred to by the nick-name Iodine). As the panel continued to gain popularity, the daughter began to occupy center stage more frequently, eventually evolving into every parent’s nightmare – “The embodiment of all the brats I ever knew,” as Hatlo once described her.

Iodine was (most probably) the first of the Naughty Little Girls who would rise to prominence during the 1930s, effectively filling the gap left by the ‘Flapper’ strips of the previous decade. In many respects, she represented a major deviation from the formulas established by Buster Brown and the Katzenjammers. Unlike Hans and Fritz, Iodine wasn’t willfully antisocial, she was simply incapable of avoiding disaster by nature. Nor, by the same token, was she a babe-in-the-woods like Florence from Buster Brown; Iodine didn’t need a male counterpart to get her into trouble.

Little Iodine’s everyday catastrophes played out like a domestic comedy in which her long-suffering parents were the eternal fall guys. Typical storylines revolved around Iodine inadvertently embarrassing her father – proving him a bigger fool than everyone already suspected (something accomplished with comparative ease, needless to say). While spanking wasn’t a prerequisite ending to every story, it was a regular event which became more commonplace as Hatlo developed the characters. The strip’s interpersonal dynamics held almost universal appeal: kids could laugh at Iodine’s antics and parents could relate to Henry’s constant sense of humiliation.

When Little Iodine is spanked, it is generally with her skirts flipped up, on the bottom of her drawers.

"Jimmy Hatlo's Iodine was quite possibly the most-spanked little girl in the Sunday comics of the 1950's." - Handprince