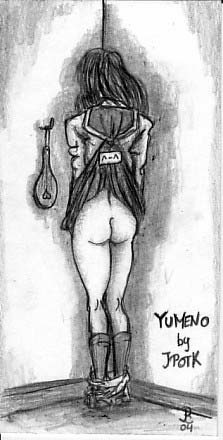 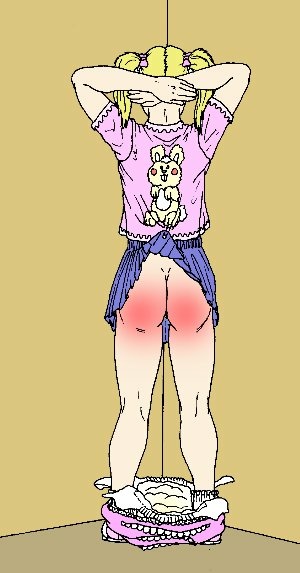 Pinning up a spankee's skirt to expose their buttocks before and/or after their spanking, typically while they are made to stand or kneel waiting to be spanked or "cooling off" after the spanking, such as in corner time, is a punishment technique frequently found in spanking art, fiction (literature and videos) and roleplay.

The pinned-up skirt can also be useful during the spanking, to expose the buttocks in a relatively upright spanking position where the skirt can not be simply raised and will remain up.

The skirt is pinned up to the spankee's back, typically with a safety pin or similar tool. In some works of spanking fiction, spankees are made to wear special clothing that is already prepared for this method by buttons on the back and matching button holes at the hem of the skirt.

If a shirt is worn, its rear hem may need to be rolled up or also to be pinned up. Likewise, if the spankee wears more than one skirt (as often in Victorian dress), all skirts will need to be either taken off or pinned up to achieve a bared bottom.

The underwear, if any, will usually be either taken off or pulled down to expose the buttocks fully. In a milder variant of the punishment, it is considered enough if the knickers or panties are exposed via pinning up the skirt.

The method makes the spankee's bottom fully visible without requiring them to take the skirt (or dress) off. They can remain fully clothed from the waist up while they are shamefully exposed in the rear and below.

The method also serves to focus everyone's (including the spankee's) attention on the spankee's displayed buttocks.

Used in corner time, the method will humiliate the spankee further and, perhaps, show people who happen to enter the room after a spanking the redness (and possibly the marks) of the punished person.