Punitive flogging in a women's prison, 19th century
The barefoot inmate is placed on a punishment bench with her wrists and ankles restrained to obstruct limb movement 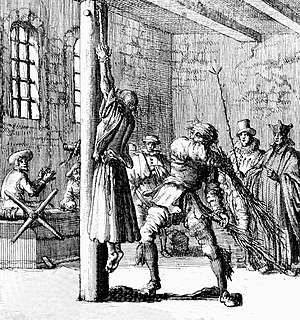 Birching in a German prison, 17th century
The prisoner is strung up in suspension with her bare feet off the ground to prevent resisting or escaping from the CP

Prison corporal punishment is inflicted on inmates in order to serve several basic functions and purposes:

Prison corporal punishment is supposed to serve as a deterrent from potential future transgressions for the prisoner him- or herself and also for all other inmates present. Each method of punishment in use is therefore inherently designed and measured to pose a large enough threat for any potential rulebreaker to effectively bring out a compliant manner of conduct from all inmates equally. For that reason rather strict forms of punishment are typically administered even for relatively minor breaches of prison rules committed by an insubordinate inmate during incarceration. The general aim is to frustrate unruliness among the prisoners already in the very early stages to effectively insure safety for the staff in the long term.

Prison corporal punishment is usually designed to be severe, therefore the receiving inmate typically is restrained in a very strict manner, largely obstructing any body movement. The punishment is principally administered by trained prison staff to cause maximal levels of pain and distress for the delinquent, while largely avoiding unwanted injury on him or her. During the procedure it normally remains impossible for the inmate to halt or abort the punishment before its formal conclusion. Therefore the receiving person typically has to endure mounting and increasingly intolerable pain over a prolonged timeframe, where his or her natural reflex to escape the distressful situation at any cost has to be considered. The inmate therefore will naturally use any reserve of strength to reflexively flee or break free from his or her punishment. Especially female prisoners will often act very impulsively and emotionally driven with highly incalculable and often convulsive motions of their arms and legs. For this reason very strict restraints are typically employed to hold particularly female delinquents firmly in place in order to obstruct any limb and body movements, that could potentially compromise the execution of the procedure and cause unwanted harm to the prisoner.

The inflicted beating during any form of prison CP typically aims at bare body parts (usually back, buttocks or undersides of the feet), so the prisoner has to be unclothed at least partly in the required areas. As a safety routine the delinquent principally undergoes any severer form of CP in his or her bare feet, so the risk to get injured by a resisting inmate is considerably reduced for the executing staff. Therefore all possible footwear has to be taken off beforehand as well. In typical penal institutions for women up to the early 20th century this routine could be omitted by the guards, as prison inmates of the female gender had any footwear already taken away during intake as a matter of course and were generally incarcerated in their bare feet only. In several countries of the world a barefoot rule for female prisoners pertains to the present day, hereby easing up the preparation for any procedure of CP scheduled.

Due to the stark imbalance in power found in virtually all constellations of incarceration, an archetypical risk subsists, that the right of corporal punishment on side of the guards is taken advantage of arbitrarily and excessively over the prison inmates way beyond its actual necessity. Condemned prisoners usually have no directly available remedies and the officers are sufficiently protected against any form of actual liability by certain mechanisms in place and also the blue wall of silence (see Wikipedia link below). So the detained prisoners are left constantly vulnerable to all forms of potential physical and psychological abuse brought on them by their respective guards they usually can never escape. Prison CP by itself and also the constantly induced fear of receiving CP are therefore being used as a means of oppression by prison staff against the widely powerless inmates in almost every situation of incarceration where the right to use CP exists.

Basic forms of prison CP are usually meted out with a flogger or a whip on the detainee's bare back. In past centuries, it was also often given with a birch. Especially in women's prisons and sometimes reformatories the delinquents also receive CP on the buttocks, usually with a cane, a strap (a very heavy version is often called "prison strap") or a wooden paddle as well as on the soles of their bare feet, where usually with a thin cane or a short whip is used. The latter count as milder forms of CP and therefore more suitable for female delinquents with sufficiently satisfying results in response to committed transgressions or general misconduct within prison. Those can also be administered considerably easier by the often majorly female staff in women's prisons using lighter instruments and require not as much trained skill and stamina compared to the usage of a whip, where a certain degree of experience is required. Especially sets of foot bottom caning are known to be highly effective on female prisoners, who require punishment during incarceration. For this reason caning of the bare feet is still employed as a standard form of CP within women's prisons in many countries to this day.

A frequently employed option to further aggravate the administered prison punishment and to render it even more distressing for the inmate while making it overall harder to endure lies in ordering the delinquent to count out each stroke aloud upon receiving. Hereby the count always has to be pronounced clearly and distinctly enough to be satisfyingly intelligible for the executing prison guard and possible witnesses attending the procedure. As a general rule a miscounted stroke or one that is not pronounced in an intelligible manner is repeated until the requirements for a correct count are being met. A more severe form includes beginning the entire punishment anew upon any kind of mistake made by the inmate during the count. The more moderate mixed form is usually set up in a way, that a miscount or an unintelligible one within the range of the first 20 to 35 strokes leads to a complete restart of the entire punishment, each mistake after that on side of the inmate will only get the respective stroke repeated by the prison guard meting out the punishment. This not only has a severly distressing effect on the receiving prison inmate while potentially prolonging the procedure by a substantial number of strokes, it is also preceived as gravely humiliating, even more when a number of witnesses are present during the execution of the punishment. This method of intensification is mostly employed when one of the more moderate forms of CP is meted out, such as striking the delinquent's buttocks with a strap or a paddle and also quite frequently when beating the soles of his or her bare feet with a thin cane or a short whip using the traditional German method of Bastonade on a punishment bench. Ordering an inmate to correctly count out the strokes received with a whip on the bare back usually poses a near impossible task especially for most female prisoners, so with this form of CP it is used far more rarely. Still this method of aggravating corporal punishments is highly popular among prison officers and employed quite frequently, when prison inmates are made to undergo any form of CP.

In consensual spanking, if prison corporal punishment is enacted in its pure form, it typically sets up images of a severe beating with an object, not a light spanking by hand. Often in this kind of live action role play the use of a safe-word is ruled out completely to simulate an actual incarceration setting where the measure of the punishment is determined by the giving person alone while the receiving "prison inmate" is actually rendered powerless and entirely dependent on the "prison officer's" volition. As in a typical real-life prison situation the stark imbalance in power between the "guard" and the "inmate" is hereby one of the key elements in this specific and very popular form. Besides traditional whipping and paddling or strapping the bare buttocks especially caning or whipping the soles of the designated prisoner's bare feet in one of its various forms is very often used in this context. This is the case as this specific method is not only excruciatingly painful for the "inmate", if executed close enough to an authentic prison intensity, but also implicates maximal humiliation for the receiving person, which is usually desired by both parties. As foot caning or whipping is a method of CP specifically conceived and perfected for female offenders in its western form, women in particular react very intensely to beatings of this kind. Female recipients tend to tear up very early on as the pain sensations are perceived as close to unbearable after only a few sharp strokes on the soles of their bare feet as this kind of CP elicits a very intense emotional response from women. Therefore in a consensual prison setting this kind of CP is employed very frequently, especially where the female partner assumes the prisoner's position and persona.