As soon as affordable software for figure rendering such as Poser became available in the mid-1990s, some artists began to use this technology to create spanking art. Another popular (and free) software for posing and rendering human figures is DAZ Studio.

The advantage of rendered art compared to drawing and painting is that the artist can create near-photorealistic images without being required to learn the techniques of 3D Figure Drawing, human body proportions, anatomy, and the laws of light and shadow — and without the need for real-life models. In rendered art, the artist selects or creates the characters, clothing, setting, poses, facial expression, light sources, camera angle etc. — and the software then converts the virtual scene into a 2D image (or animated movie).

A disadvantage of near-photorealistic rendered spanking art is that the figures can easily look like mannequins—very similar to humans but clearly not real. The human eye is very good at seeing a difference between a photo of a real person and high quality rendered art and the brain can tell that something about the figure is not quite realistic enough.

Render algorithms for non-photorealistic rendering and image filters can also be used to create images that resemble, for example, pencil, charcoal or crayon drawings, or cel shading.

Artists who work in this technical style include Maryanne and Spankingcomics. 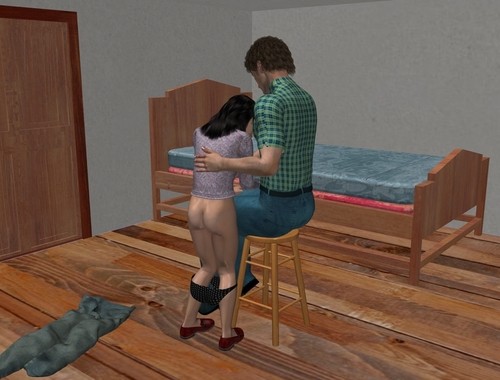 This is a list of artists who specialize in rendered spanking art: