A teacher is a male or female adult whose profession is the teaching of knowledge, behavior norms, arts, crafts, physical and intellectual skills to other people by means of verbal instruction, demonstration and media.

This process transports the knowledge, skills and cultural achievements of one generation to the next generation and is thus the key factor to cultural progress.

The art and science of teaching is also known as pedagogy.

The most common form of professional teaching is the teaching of children. For better efficiency, typically a teacher teaches not a single child but a group of children simultaneously, called a class. The rooms in which the class is seated for this purpose are called classrooms and the buildings and institutions of this teaching are called schools; the whole process of education in schools, which today has a typical minimum duration of 8 years, is known as schooling.

Individual teaching sessions are called lectures or lessons. The children who attend lessons (the "teachees") are called schoolchildren (schoolboys and schoolgirls), pupils or students.

The history of schools reaches back to antiquity. The level of intellectual, cultural and economical achievement of a people was usually in direct proportion to its quality of schooling.

For a very long time only boys were educated by private teachers and in public or private schools, and the teachers were usually male as well. They were also referred to as schoolmasters. This has changed in the last two to three centuries; today in most countries girls attend schools the same as boys, and teachers can be either men or women. The terms schoolmistress and schoolmarm are female equivalents to schoolmaster.

The methods and techniques of teaching, as well as the subjects taught, have evolved slightly over the centuries since antiquity, and changed dramatically within the past century.

The stereotype of the schoolmaster as a punisherEdit 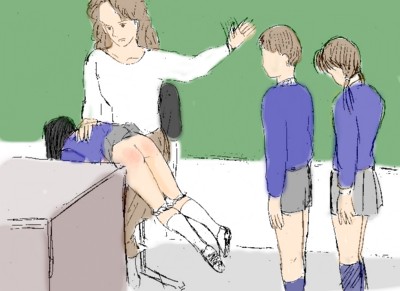 From the earliest depictions of teachers in the Middle Ages up to the Renaissance era, the birch rod was depicted as the typical tool of the teaching profession.

Famous fetish model and pioneer spanking actress Bettie Page was a school teacher for a brief period. Jacqueline Omerta, actress and founder of spanking video company Pacific Force, was once a high school teacher in Boston.

Below is a list of role reversal videos in which female teachers get punished.