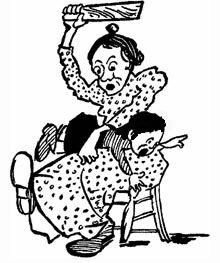 The drawing is the most popular medium for spanking art throughout history. Interestingly, when it comes to spanking art, painting has never taken over the leading role, as it happened with most other subject matters such as the nude or the still life. (However, unlike painting, photography was able to set foot in this genre to complement drawing.)

Practically all spanking drawings, irrespective of style and era, are drawings from imagination. Rare exceptions include drawings that were based on photo references (see creative tracing).

Spanking drawings in the Middle Ages and RenaissanceEdit

From the period of the middle ages, spanking drawings with pigmented ink are featured in religious and secular book illustrations. Soon the rise of first image printing technologies such as the woodcut and the engraving made it possible to reproduce black and white illustrations in many identical copies. There are a handful of spanking art prints from that era.

Later centuries brought advancement in perspective, as well further technical innovations such as the etching and the lithography, which allowed reproducing drawings in fine gradients of grey, from pitch-black to almost white. Employing these techniques, a skilled artist could create delicate figures that appeared very realistic and three-dimensional by making clever use of texture, hatching, light and shade. Most of these works were book illustrations. See spanking in illustration, school corporal punishment (antiquity-1699) and historic spanking art for more information.

Spanking from the Age of Enlightenment to the 19th centuryEdit

For examples of spanking art in the age of enlightenment, see school corporal punishment (1700-1899).

The invention of photography didn't wipe the art of drawing out, but had a logical impact on it: getting close to photorealism was no longer a challenge for most artists. Instead, artists turned to creating drawings that did what photography couldn't do. They dared into greater degrees of abstraction and exaggeration of features. This was the era when the art of the caricature and the cartoon flourished. Spanking art became funny. The first humorous spanking cartoons by artists such as Wilhelm Busch were drawn in that period. See spanking in cartoon for more on this.

New photographic reproduction technologies allowed the reproduction in print of almost any artwork. This meant book and magazine illustrators could work again in ink, charcoal, or whatever medium they preferred.

At the beginning of the 20th century, the cartoon spawned an altogether new art form: the comic. Right from the beginning, spanking was a very popular theme in comics. In most comics series, child characters were the heroes, but it was felt important to show that they were just regular normal children who, like all childen of that time, were spanked for misbehavior (and sometimes unfairly) by their parents, uncles, aunts, teachers, or guardians. So this era produced a lot of comic child spanking art. The series that probably most famous (and loved) for its many funny spanking scenes was The Katzenjammer Kids, in which the two boy protagonists were spanked at least once in nearly every story. See spanking in comics for more on this.

Spanking drawings in the computer ageEdit

Digitally edited and tinted pencil sketch by Jameslovebirch based on a '60s magazine photo (2012).
Pencil and watercolor portrait of actress Kailee converted to monotone sepia.

The invention of the computer allowed artists to create and edit their artwork in digital form. Using a scanner, any drawing could be converted into an image file which could then be digitally edited, e.g. colorized, with an image editor before it was given to a publisher for printing.

About at the same time, a worldwide boom of the Japanese manga an anime culture set in, which brought many young fans to drawing fan art (doujinshi) or their own characters in manga/anime cartoon style. Thanks to computers and the Internet, creating and sharing such art became easy and popular. The manga and anime wave also grabbed the spankophile community. Today, almost 100% of Japanese spanking artists and a considerable part of the non-Japanese spanking artists draw spanking scenes in this style.